The War to End all Wars
Would War I 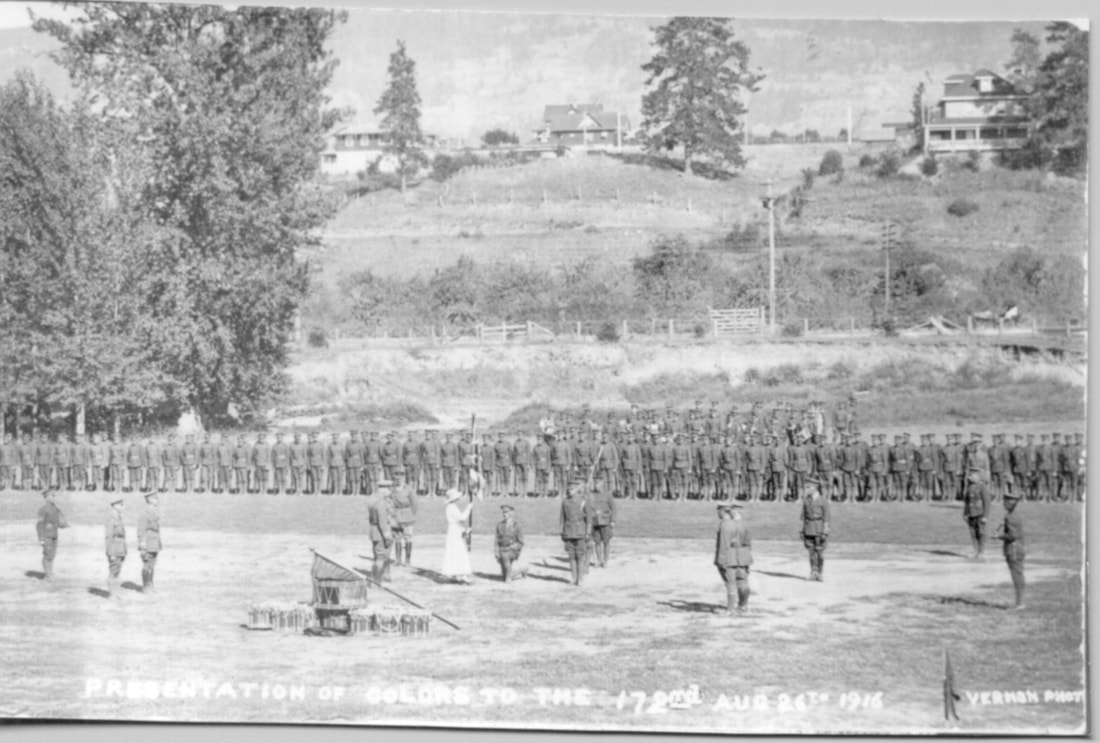 Presentation of Colours to the 172nd Reg, August 26, 1916
World War I  began in Europe and lasted from July 1914 to November 1918. Known as the Great War and “the war to end all wars”,  it eventually led to the mobilisation of more than 70 million military personnel around the world, including 60 million Europeans, making it one of the largest and most deadliest wars in history.
Between 1914 and 1918, approximately 710 men from Vernon enlisted for war, accounting for more than 20% of the population.
Okanagan First Nations men from the Head of the Lake signed up in record numbers: every single eligible Indigenous Okanagan man aged 20-35 enlisted during the war.  With so many soldiers in town, local businesses were able to stock boots, socks, uniforms and rations, providing a boost to the local economy.  But when the first local contingent of soldiers was sent overseas in 1915, the brutalities of war became all too real. In June 1915, the first news reached Vernon hat local soldiers had been killed in France and the list of casualties only continued to grow.
By the end of 1917, little remained of the festive spirit of the war’s early days. While men and women on the home front continued to fundraise for troops overseas, an atmosphere of sadness and despair had begun to settle over the town. 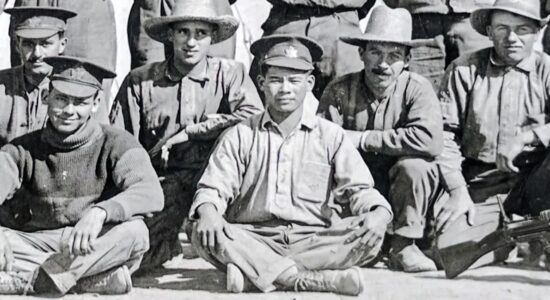 Lee poses for a photo at the Vernon training camp, with other members of the machine gun section of the 172nd Battalion (Rocky Mountain Ranger Bn) in 1916. His position in the front row, with the Lewis gun beside him presumably shows that he was held in high regard by his fellow soldiers (Canadian War Museum)
At the time of the First World War, anti-European immigrant discrimination was common. Immigrants from China, Japan, and other non-European countries were discriminated against, and seen as other and less Canadian than those from Europe.
Frederick Lee came from a large and successful farming family that had settled in Kamloops. When his father died, it became hard for his mother to maintain the family farm, and she moved back to China, along with most of his siblings. Fred Lee choose to stay in the country he considered his home.
Because  he was of Chinese decent, Fred Lee was not granted some basic Canadian rights, such as the right to vote. Despite this discriminations, he chose to enlist with the Rocky Mountain Rangers to serve the Canadian military. Private Lee trained here at the Vernon Military Camp and was assigned the role of machine-gunner, indicating he demonstrated a high level of skill to his superiors in training in order to achieve this designation.
The Rocky Mountain Rangers were eventually broken up and assigned to other formations and Private Lee was deployed overseas as a member of the Canadian Expeditionary Force (CEF).  Lee fought and survived battles and victories in France and Belgium, including the Canadian victory at Hill 70, where unfortunately he did not survive. Most likely killed by a German artillery shell in August 1917.

The listed on this page is only a small representation of the men and woman who served during the war.

IN FLANDERS FIELDS
​BY JOHN MCCRAE

In Flanders fields the poppies blow
Between the crosses, row on row,
That mark our place; and in the sky
The larks, still bravely singing, fly
Scarce heard amid the guns below.
We are the Dead. Short days ago
We lived, felt dawn, saw sunset glow,
Loved and were loved, and now we lie
In Flanders fields.
Take up our quarrel with the foe:
To you from failing hands we throw
The torch; be yours to hold it high.
If ye break faith with us who die
We shall not sleep, though poppies grow
In Flanders fields.