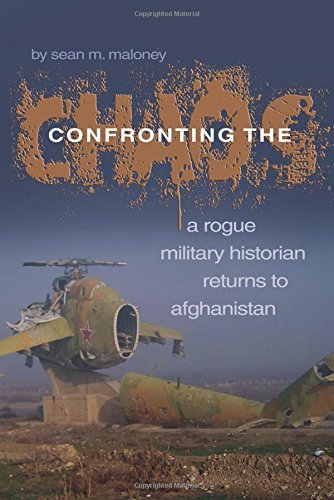 CONFRONTING THE CHAOS: A ROGUE MILITARY HISTORIAN RETURNS TO AFGHANISTAN

How exactly do you stabilize a country that has been at war for nearly thirty years? Challenging the Chaos is the first book to look at the Provincial Reconstruction Teams, the Embedded Training Teams, Strategic Advisory Team-Afghanistan and other little-known units that helped the Afghan people establish a government after the Taliban fell. With the historical and political odds stacked against them, the men and women of these vital organizations worked shoulder-to shoulder with Afghans at all levels of society, and at great personal risk in a lethal and unforgiving environment. Their efforts helped stave off another Afghan civil war and successfully prevented the Taliban from exploiting the chaos left in the wake of their 2001-02 collapse.

Challenging the Chaos is a personal story written by a Canadian military historian who observed these efforts as they unfolded in 2004-05. Sean. Maloney takes us on a journey from exotic and poppy-laden Badkashan province in the north, into international intrigue in the capital, Kabul, and then to Kandahar province in the south, where the threat of IED attacks lay around the corner on a daily basis. This work details the operations of the Provincial Reconstruction Teams (PRTs), which played a vital role in stabilizing Afghanistan after the Taliban were removed from power. It provides understanding about how the international effort in Afghanistan and the enemy has evolved since 2003 so we can succeed in Afghanistan. Afghanistan is not Iraq and it is dangerous to template one war onto the other. The war in Afghanistan is unique, as is our response to the insurgency-Afghanistan, its people, and its insurgent's needs to be understood on their own terms and not in relationship to the American experience in Iraq. The United State's closest ally in Afghanistan, next to the Afghan people, is Canada and Canada has played a key role in the effort- this goes unrecognized by American politicians and the American people even while Canadian soldiers are working, fighting and dying alongside American soldiers.