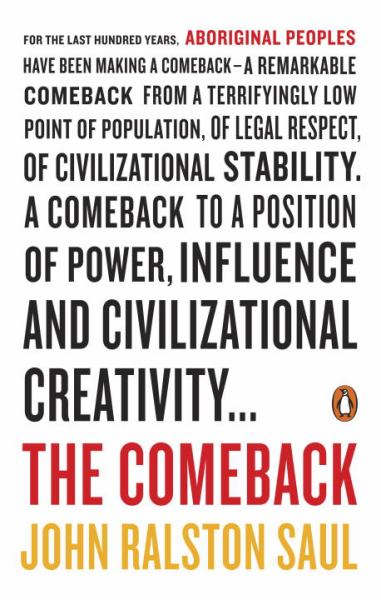 The Comeback - How Aboriginals Are Reclaiming Power And Influence

Once again, John Ralston Saul presents the story of Canada’s past so that we may better understand its present – and imagine a better future.

Historic moments are always uncomfortable, Saul writes in this impassioned argument, calling on all of us to embrace and support the comeback of Aboriginal peoples. This, he says, is the great issue of our time – the most important missing piece in the building of Canada. The events that began late in 2012 with the Idle No More movement were not just a rough patch in Aboriginal relations with the rest of Canada. What is happening today between Aboriginals and non-Aboriginals is not about guilt or sympathy or failure or romanticization of the past. It is about citizens’ rights. It is about rebuilding relationships that were central to the creation of Canada. These relationships are just as important to its continued existence. The centrality of Aboriginal issues and peoples has the potential to open up a more creative way of imagining ourselves and a more honest narrative for Canada.

Wide in scope but piercing in detail, The Comeback presents a powerful portrait of modern Aboriginal life in Canada, in contrast with the perceived failings so often portrayed in politics and in media. Saul illustrates his arguments by compiling a remarkable selection of letters, speeches and writings by Aboriginal leaders and thinkers, showcasing the extraordinarily rich, moving and stable indigenous point of view across the centuries.