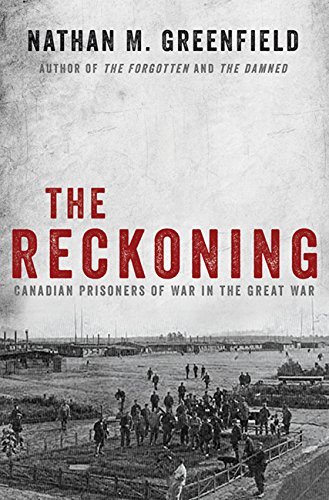 The Reckoning: Canadian Prisoners of War in the Great War

Following on the heels of his book The Forgotten comes a new book about the lives of Canadian prisoners of war in the First World War.

Conditions in German POW camps were generally vile, with soldiers having little to eat but thin soup and putrid meat. Canadian men were used as slave labourers in salt mines and coal mines, and those who refused the work were beaten. Any soldiers thought to have engaged in sabotage were beaten and tortured, and some were murdered.

Some POWs attempted escape, a few more than once, using ingenious and dangerous methods. One soldier attempted to escape by secreting himself in a wicker bask. Others, who were hearty frontiersmen, did escape, making their way out of Germany by hiding in forests and ditches and using magnetized razor blades as a compass.

In The Reckoning bestselling author and Governor General’s Award–nominee Nathan M. Greenfield explores life and death in the camps, as well as the attempts to run for freedom. These are the forgotten stories of our soldiers at war and in the camps, and of how they never gave up hope of making it out alive.