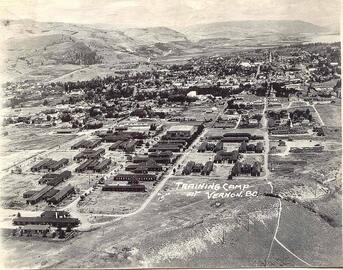 This is a live site that is updated as information is comes in.

If you have photos to add, please email to Archives Email  with
full descriptions, names and any information.
If you spot an error that need to be corrected, or any feed back, please email the website volunteers to have it updated or corrected.
Again please provide us with as much detail as possible.

​Thank you
The Webpage Team

History of the Vernon Cadet Camp

The Vernon Military Camp has a long history dating back to 1912. After its use as the 110 Canadian Army Basic Infantry Training Centre during WWII the camp was mothballed from 1946 to the spring of 1949.
In July of 1949 the camp was reopened as an army cadet camp.  That first summer, some 1000 army cadets from BC and Alberta arrived by passenger train and trained for ten days. 240 young men stayed behind to take six weeks of trades training.
Vernon joined Ipperwash, Dundurn, Farnham and Aldershot as the main training camps for army cadets across Canada that summer.
​In 1949 and till the end of the 50s, training focused on Infantry Basic Training, Driver Mechanic and Signals. Over the years training changed with the times and today the emphasis is on leadership, adventure training, and fitness; all with a military flavour.

HM Queen Elizabeth II visited the camp in 1959 during her cross-country tour. ​

In the 1967 celebrating Canada's centennial, Band Company and the Guard toured after camp for a 2-week Tattoo tour of BC. That summer for the first time, sea and air cadets also attended courses at Vernon.
​In 1975, a major change occurred when the first female cadets attended an experimental two-week course at the end of the summer to prepare them to be the first female staff cadets the following year when female cadets would finally train at Vernon alongside the male cadets. Soon female cadets were fully integrated into the training program in all courses with female CIL officers taking company and headquarter responsibilities. Ex Rambler began as the main six-day training exercise for all CL course cadets culminating with a three-day 45 km route march over the commonage.
In 1977, USMC Jr ROTC Cadets from Washington State began a 13-year exchange program. In 1979, the camp celebrated its 30th anniversary and the centennial of Royal Canadian Army Cadets with the first ever Freedom of the City Parade for Cadets anywhere in Canada. On August 4 that summer some 1300 cadets marched along a parade route in downtown Vernon, with drummers drumming, flags flying and weapons bourn. In 1994 the camp hosted the first ever reunion for an army cadet camp and some 1800 former cadets and staff returned for the four-day event.

In 1999 the camp celebrated it's 50th anniversary with another successful reunion and museum exhibit.
The training centre hosted many guests and visitors over the years, from actor Martin Sheen to the Royal Inniskilling Dragoons Guards band to several Lieutenant Governors of British Columbia.

The names have changed, but the camp still reflects its early days because many of the WWII constructed H-Huts, barracks and mess halls are still standing and used every summer.
Camp Vernon is now the oldest continuous serving Cadet Training Centre in Canada having surpassed Banff in 1999 and Ipperwash in 1994.
​Today only a few 1941-45 constructed H-Huts remain elsewhere in Canada; most have been demolished or forgotten. Camp Vernon has the largest and best conditioned examples of these buildings. The museum’s photo gallery has an extensive collection of the camp's buildings.
Cadets attending Vernon take pride in either bragging or complaining about the heat because daily summer temperatures are usually 28-32c and it's not uncommon for the temperatures to hit the mid 30s for days and weeks on end and on some days, they have touched 40c. The saving grace is the low humidity and a remarkable lack of insects and mosquitoes.

Since 1949 over 100,000 cadets from across Canada have trained here in Vernon. This remarkable history is a tribute to the cadet programs and to the city of Vernon.